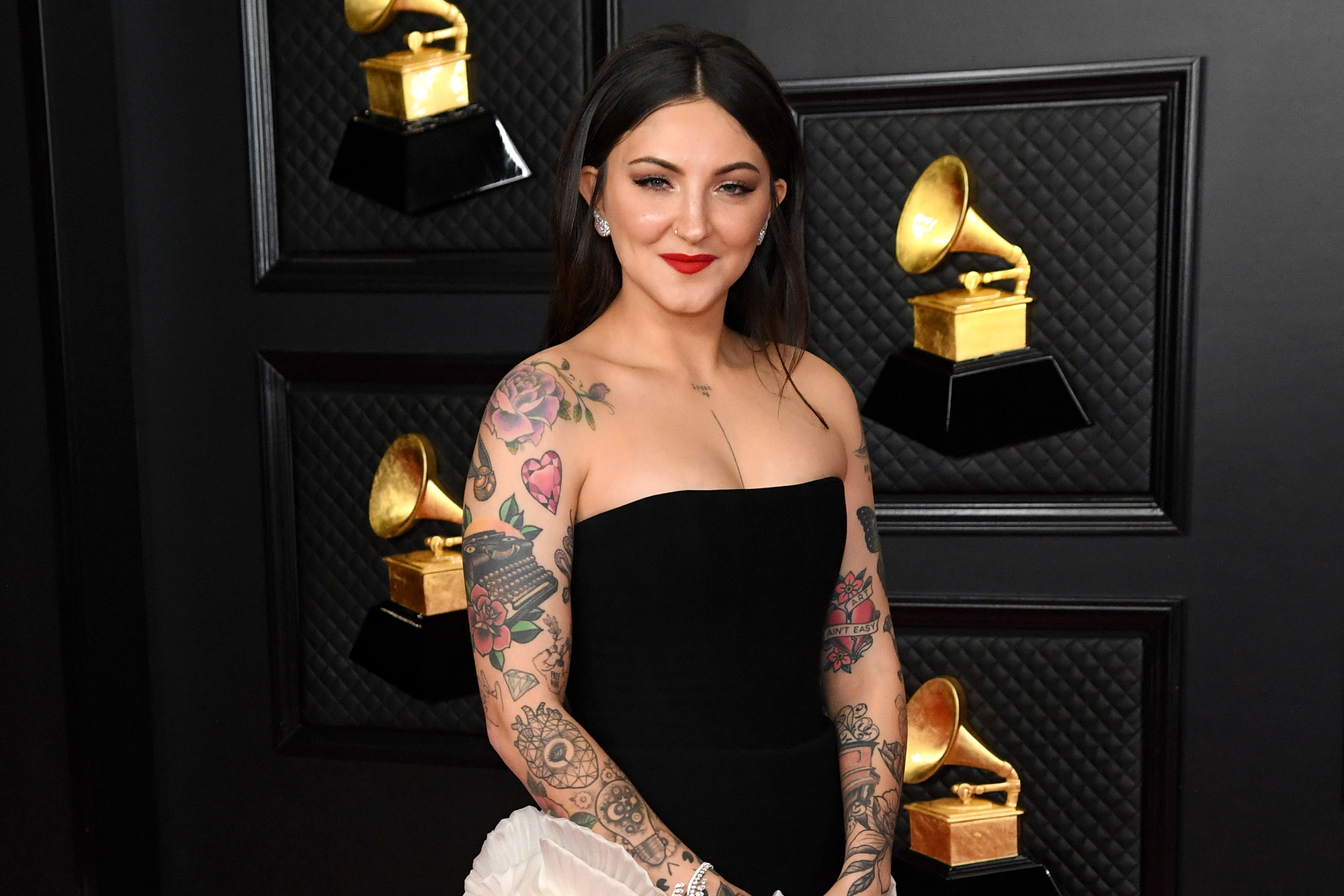 Julia Michaels’ tattoos are as personal (and, occasionally, as painful) as her pop hits.

The “Issues” singer, 27, has co-written songs with superstars including Selena Gomez, Justin Bieber, Britney Spears and Ed Sheeran in addition to releasing her own music, and her creative streak is apparent in her love for colorful, meaningful body art.

“I don’t even know at this point … I probably have at least 40 or 50,” Michaels told Page Six Style of her tattoos, which almost completely cover both of her arms. Many are the work of celebrity tattoo artist London Reese, who’s also inked Pete Davidson, Zayn Malik and Machine Gun Kelly, to name but a few.

Below, see and learn about some of the “All Your Exes” hitmaker’s many designs, some of which she discussed with us exclusively.

“A lot of my fans would show up with ‘I love you’ on their hands in Sharpie, or they’d tattoo it,” she told Page Six Style. “So then, I got ‘More’ — which was dumb, because then everyone started putting ‘Most.’”

Inking her hands wasn’t a pain-free process; “The palm really does hurt like a bitch, I’m not gonna lie,” she said.

Michaels called this Kanizsa triangle tattoo on the top of her right wrist “probably my all-time favorite.”

“It’s two triangles and three circles; it’s the symbol for perception,” she explained of the optical illusion. “Nothing is fully formed, but the brain perceives it as whole.”

Framed by flowers and filled with stars and planets, this illuminating design is located just above the perception symbol, on her right forearm.

“The light bulb of course is kind of like the bubble for ideas,” she explained during a 2017 radio interview. And I was like, ‘How do we embody the subconscious?’ Because a lot of the times when I write, a lot of times I don’t know where it comes from. It’s just like a weird, out-of-body experience.”

Continued Michaels, “I will be talking to somebody and then all of a sudden — there’s a song. And I can’t really explain it. So I was talking to London, my tattoo artist, and we were like, ‘How can we embody that feeling?’ And we came up with the universe in a light bulb.”

Michaels called this neck tattoo “really, really important to me” during our chat.

She elaborated on the design in a 2017 Vevo video, explaining, “I’ve always kind of made myself feel really small. And I think now more than ever, I have the opportunity to have an opinion, and to have a voice, and that I should speak up.”

Just below “Speak Up,” Michaels has a “line in and down the middle of my chest,” as she shared on Twitter in 2018. “Compartmentalizing the two sides of me. The love and the hate. The logical and the emotional.”

“Butterflies have always been a significant thing, and when I fell in love, they just became even more significant,” Michaels told us of the colorful winged insect on her left bicep.

The singer-songwriter has been dating fellow musician JP Saxe since 2019, and the couple have collaborated on several tunes together, including “If The World Was Ending.”

A bird in flight is inked just below Michaels’ butterfly design.

As seen on the star’s right forearm, this piece is a perfect fit for a musician.

After Michaels’ collaborator and close friend Selena Gomez made a cameo at one of her concerts in 2019, the pair got matching arrow tattoos at the base of their thumbs.

“My arrow points to you forever,” Gomez captioned in-progress photos of the ink session.

Created by LA tattoo artist Jim Sylvia in 2016, this mysterious figure is inked on the inside of Michaels’ right upper arm; she told us it was “probably [her] most painful” tattoo to date.

“It kind of, at the time, was describing my anonymity in the music industry,” she told Vevo. “I’ve always kind of felt like this is who I am on the inside. Everything’s just kind of changed so much this year that I feel like this is me, this is me showing myself, this is me at my most vulnerable.”

Michaels released her debut single, “Issues” — an ode to her open struggles with anxiety — in 2017.

“This was not fun,” she quipped of the pain associated with this particular tattoo. “I wouldn’t wish that on anybody.”

Julia Michaels shows off some of her tattoos at the 2021 Grammys.Getty Images

Just underneath, you’ll find the first of her two “Harry Potter”-themed tattoos, which matches one her father has on his forearm. Quidditch, anyone?

A vintage typewriter framed with flowers and leaves — a nod to her career of choice — is located just under the Snitch.

As a sweet tribute to her fans, whom she calls her “little gems,” the musician inked several colorful stones on her right arm. A pink heart-shaped jewel and blue diamond can be glimpsed on her upper right arm, and she’s also got a round red gem inside her elbow.

This geometric black-and-white design is located right in the middle of Michaels’ right arm, next to her elbow; look closely, and you’ll spot a crying eye in the center.

“As cliche as it sounds, it’s because I wear my heart on my sleeve,” she told Vevo. “And we put the eye in there because it’s my way of showing myself a little bit. And showing that I’m slowly coming out of hiding. Because I do, I hide, and I’ve gotten so content with hiding over the years.”

Similar in style to the aforementioned anatomical heart, this flower sits atop Michael’s right hand.

This diminutive musical symbol sits on the middle finger of her left hand.

Rounding out Michaels’ trio of finger tats is this bumblebee on the middle finger of her right hand, right next to the heart.

Inspired by a doodle by artist Geffen Refaeli, this surrealist creation on Michaels’ right upper arm depicts a sweater-clad figure with flowering branches in place of a head.

You’ll find this delicate design — an ode to friendship, or perhaps true love — on the star’s upper right arm, near her elbow.

Julia Michaels shows off a few of her many tattoos.Instagram

Michaels initially inked a pink lotus flower on the inside of her right elbow in 2015, following a breakup. But she wasn’t entirely pleased with the rebirth-themed design.

“I do kind of regret this one. It’s my lotus, but it looks like an artichoke,” she shared in a radio interview two years later. “And I got it the day my ex broke up with me the first time — I know, I’m a mess. And I thought, like an idiot, that I could combat emotional pain with physical pain. Don’t do it, guys — not smart.”

In 2018, she tasked London Reese with inking an “X” through the design, along with the words “BAD IDEA.”

Just north of the crossed-out lotus, you’ll find a delicate feather design. Several other members of Michaels’ family have the same tattoo — because, as she explained, “birds of a feather stick together.”

The slithering pink serpent above the feather is Michaels’ second “Harry Potter” tat; as you might guess, she identifies as a Slytherin.

The feathery writing instrument on the inside of her right forearm joins the typewriter, microphone, piano and treble clef as yet another tattoo dedicated to Michaels’ craft.

And just next to the quill pen, you’ll spot this stinging arachnid clutching a small rose — a nod to Michaels’ zodiac sign, as she’s a Scorpio.

Julia Michaels shows off a few of her many tattoos in 2019.Getty Images

The star had this simple reminder inked in script on the inside of her right forearm in 2012.

A broken heart featuring these all-too-true words on a banner sits on the inside of Michaels’ left arm, just above her elbow.

An ideal tattoo for a music-maker like Michaels, this instrument appears on her left forearm beneath her “Art Ain’t Easy” tattoo, framed by intricate scrolls.

Over on Michaels’ left arm, just under her bird tattoo, sits a portrait of a woman with a simple, cartoonish smile.

This large floral design sits on the back of the star’s left forearm.

This duality-themed design runs along the side of Michaels’ peony tattoo. “[It’s] basically me just embracing both sides of my personality,” the singer explained on Twitter.

Julia Michaels shows off some of her tattoos at the 2019 Billboard Music Awards.FilmMagic for dcp

This fill-in-the-blank sentence, which nods to Michaels’ self-discovery journey, sits on the left side of her neck.

On her left shoulder, Michaels has a red-lipped woman’s profile along with the words, “Dear heart, I’m counting on you. Don’t f—k this up.”

The tattoo appears to have been inspired by poet Rudy Francisco’s “The Body,” in which he writes, “Dear heart – I trust you. Don’t f—k this up.”