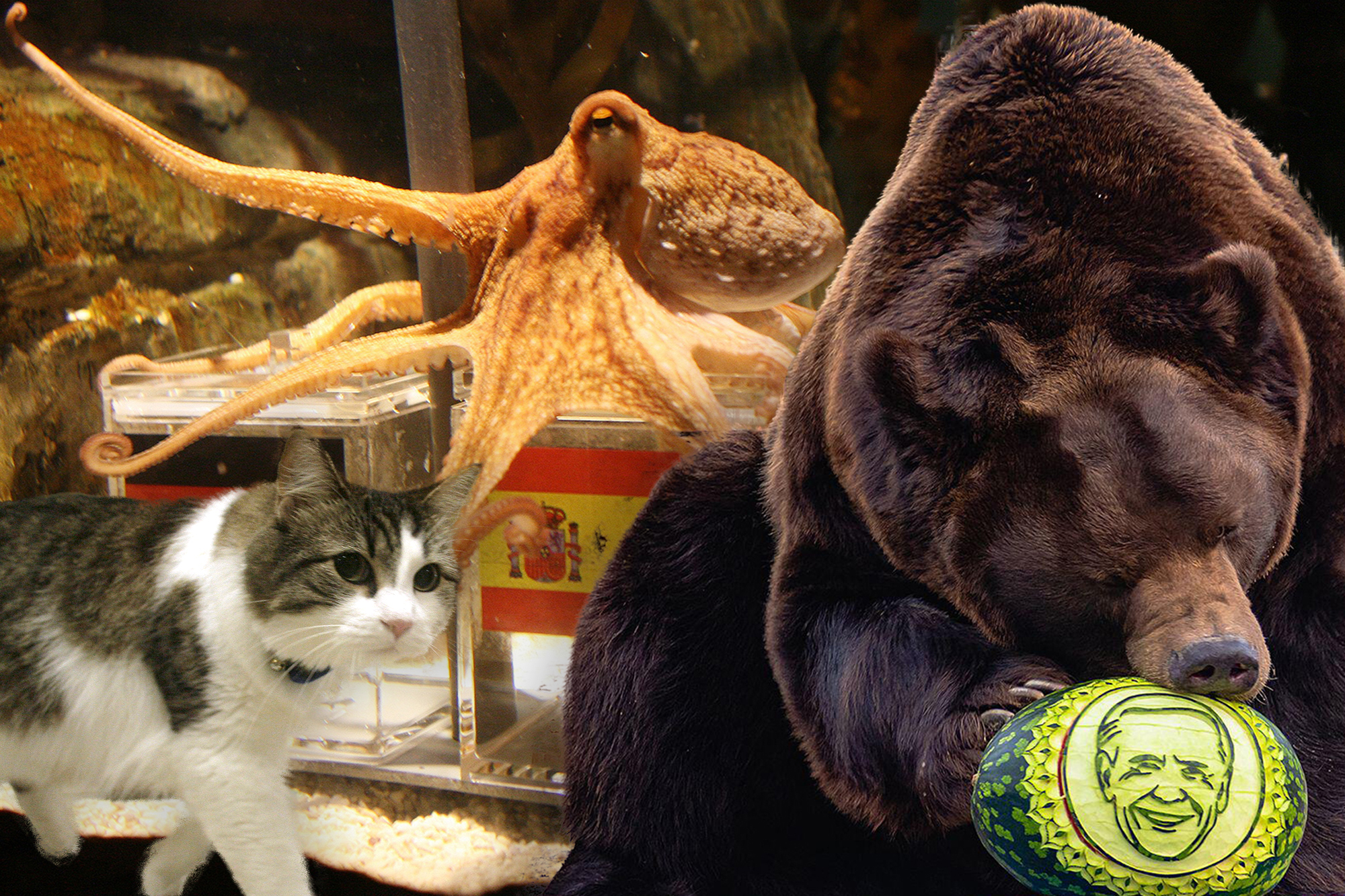 These clairvoyant critters can predict the future.

But there are other animal seers, supposedly prognosticating everything from natural disasters to the winner of the 2021 Super Bowl.

Using animals to divine the future in the age of online statistics and real-time weather reports seems medieval. However, many of these bestial capabilities are shockingly precise, with some even boasting roots in science.

Here are the eight animal prognosticators that make Punxsutawney Phil seem about as prescient as as a fortune cookie.

When it comes to soccer predictions, he’s a Magic 8 Paul. During his relatively short existence, from 2008 to 2010, this psychic cephalopod correctly foretold the outcome of a mind-boggling eight athletic events — including the 2010 World Cup — from his fish tank in Germany. Paul the Octopus flagged his selections by picking a mussel from containers representing the competing nations. Unfortunately, the mystic mollusk made enemies among German soccer fans, who threatened to cook him for correctly choosing Spain to beat the home team in the 2010 World Cup.

Eli the Orangutan chose the Ravens over the 49ers, which is how Super Bowl 2013 played out. AP

You could fill a football stadium with the animals that’ve tried to guess the Super Bowl champion over the years. None were as reliable as Eli the Orangutan, of Salt Lake City’s Hogle Zoo, who picked the correct winner of seven consecutive NFL finales. He made his picks known by smashing papier-mache helmets emblazoned with the names of the competing teams. This orange oracle died in 2014, but betters can get predictions on the 2021 Super Bowl from a veritable menagerie of sport-savvy critters, including dolphins and Cincinnati’s puking hippo.

Russian zoo animals might be accused of election interference after picking Biden to become the US president this past fall. Two politically literate tigers and a brown bear at a Siberian zoo chose their 2021 candidate by demolishing watermelons carved with the current president’s image while ignoring its Trump counterpart. Meanwhile, a South Carolina squirrel named ChrisChris — son of deceased presidential predictor Gnocchi — incorrectly forecast the latter by gobbling seven nuts from a bowl bearing Trump’s name and just three from Biden’s bowl.

Are parrots the stock jockeys of the bird world?Getty Images/iStockphoto

No equity analyst, no problem. This feathery financial savant from South Korea outperformed most humans in a competition to see which stocks would fare best. Polly’s return on investment clocked in at an eyepopping 13.7%, beating out all but two of the 10 two-legged contestants, who averaged a 4.6% loss.

A catcall from Oscar means you’re probably not feline so hot. Over the course of five years, this hairy harbinger of doom accurately predicted over 50 deaths at the Rhode Island nursing home where he resides. When Oscar curled up on a patient’s bed, they were likely about to kick the bucket. Despite seeming like the Grim Reaper, Oscar is viewed as a calming presence. He’s even been praised in eulogies. He also provided the inspiration for the death-divining kitty in “Doctor Sleep,” a spinoff of “The Shining” by Stephen King.

While certain cats are harbingers of death, dogs may be able to detect new life.Getty Images/iStockphoto

Dogs can reportedly tell when a woman is pregnant months before she can by sniffing out hormonal, behavioral and other prenatal changes — like a canine sonogram. Fido might even initiate cuddling to help snap the oblivious mother out of a pre-partum funk. Currently, the research is mostly anecdotal, although dogs can be trained to sense ailments from cancer to the coronavirus.

The catfish’s reliability as a seismometer is widely disputed in scientific circles.Getty Images/iStockphoto

It might seem like a disaster-movie cliche, but critters from flamingos to toads have been shown to act differently before a force majeure. A 16-year-long study out of Japan’s Tokyo University suggested that certain catfish are sensitive to electrical activity preceding an earthquake. But these slippery seismometers were ultimately deemed “only good for eating,” as they reacted similarly to both shallow tremors and violent quakes.

Pennsylvania’s Punxsutawney Phil might be seen as the Weather Channel of meteorologist groundhogs, but other states boast their own furry forecasters, who compete with rival rodents like local sports teams. A 2012 Post study determined that Chuck is the more competent weatherhog, making correct predictions at more than twice the rate of his Keystone State counterpart.